“Markets are Conversations.” Ten years after the Cluetrain left the station spouting these words, many advertisers are still left behind, desperately clinging to the romantic notion that they are storytellers. On the net, though, such ideas are fast becoming anachronisms.

11/03/2009 · Dallas, TX · For the last fifty years or so, there were a few ways for a person to be influenced by the outside world (radio, television, printed materials, actually leaving the house) and advertisers had every base covered with their brand-related stories: a billboard with a smile, a commercial alluding to Orwell’s 1984, an ad that talked about cars like normal people do… each expertly tuned to play on our emotions. With the explosion of the web, a whole new line of communication with the outside world was opened, and advertisers have been scrambling, ever since, to figure out the key psychology of reaching us in this brave new space.

There have been wonderful attempts, but from what I have seen, the advertising world as a whole has still not fully grasped this problem. Instead, people like Randall Rothenberg, president & CEO at the Interactive Advertising Bureau, insist that we make a massive effort to get this internet thing back under creative control, so that we can give people more of those resonant, emotional brand experiences for which consumers still surely pine. 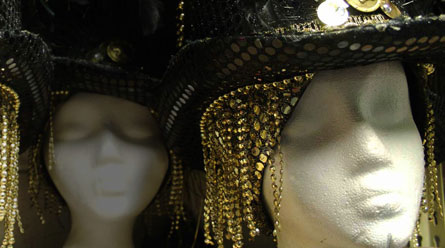 The Creepiness of It All

Imagine you are sitting around a table with a group of friends, having a conversation. One person says something, another reacts and rebuts, another reacts to the rebuttal, and so on… Thoughts are shared, bonds are strengthened, and the conversation builds in to a pleasing, enriching experience. Everyone gains, as everyone learns from those that contribute.

Now, imagine that a slightly plastic, well-designed facsimile of a person takes measured strides up to your table, has a seat, and, in an aluminum voice, begins telling you of the value of Acme brand shaving products. You try to respond to what this robo-person is saying, but you get no encouraging feedback from the bot; just continued praises of the Acme brand. You turn to your friends, each as bewildered as you, and after a few goofy looks and sarcastic remarks about the new psuedo-entity at the table, everyone continues their conversation, doing their best to drown out the noisy insistence of Acme brand marketing-speak.

This is internet advertising’s failure, and it happens because of the tired notion that people want to hear a story about the brands they consume. The internet is a social medium, and stories do not make for engaging conversation.

The Internet is Full of Pragmatists

The Cluetrain Manifesto (soon to celebrate its tenth birthday) reminded us that before there was advertising, there were markets, and before there were mediums for advertising, there was conversation. With our new found ability to reach out and share with anyone over the web, conversations are again becoming the crucial aspect of any brand-consumer relationship. On the net, consumers are no longer broadcasted to; consumers can actually join in the conversation, and now give continual brand feedback, both to the brand and amongst themselves (or in the worst scenario: only amongst themselves).

Now I cannot tell you the last time I had a conversation about any specific brand, but I can guarantee you that the conversation was based on product benefit, not on any story that was handed me by that brand. If any stories were related, they were entirely my own.

This is how internet advertising succeeds: by facilitating the sharing of the consumer’s brand-related story with both the brand, and other future/present/past consumers. And, of course, encouraging further sharing.

So maybe this is too boring for an industry full of massive budgets, elaborate photo-shoots, and celebrity endorsements. Maybe it is a bit tough to tie a Ludacris endorsement in to a forum thread, or leverage your client’s NASCAR sponsorship in a Facebook application. Creativity on the web, or anywhere for that matter, is not easy, nor is it wholly centered on well-crafted stories, or expensive aesthetic ephemera.

The more advertiser’s try to mold the net in to another story delivery system, the less their clients will see any return. Sure, TV advertising is still succeeding, mainly because advertisers have had lots of time to find what works best for that medium. Television also happens to be perfectly suited for delivering stories, as is print. But bringing the story-based model to the web is like airing a radio broadcast on HDTV. In order to fully take advantage of the breadth of experience the interenet can provide consumers, advertisers need to put away the storybooks, and reaquaint themselves with the art of conversation.